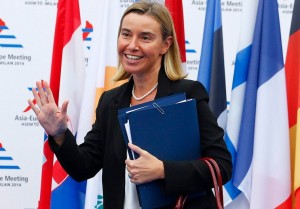 Jerusalem Post, The EU warned on Monday that continued growth of its bilateral ties with Israel and the Palestinian Authority was directly linked to their actions with regard to the peace process.“The EU recalls that the future development of the relations with both the Israeli and Palestinian partners will also depend on their engagement towards a lasting peace based on a two-state solution,” the EU’s foreign ministers said after a council meeting in Brussels.

The meeting of the EU’s Foreign Affairs Council comes amid increasing tension between Israel and the EU over settlement activity.On Sunday, Foreign Minister Avigdor Liberman said that it was a mistake for the EU to link its ties with Israel to the peace process.The EU and Israel have strong ties, and Israel is awarded a status similar to that of an EU member state. But that status only applies to areas within the Green Line.Still, Israel is worried about the increased threat of an EU boycott against products manufactured in settlements and calls from parliamentarians in EU member states to unilaterally recognize a Palestinian state.In Brussels on Monday, foreign ministers vowed to continue working against the sale of goods produced in Jewish communities over the pre- 1967 lines. This includes West Bank settlements, Jewish neighborhoods in east Jerusalem and Jewish communities on the Golan Heights. The EU believes that all those communities are illegal. Recently, dairy and poultry products from over the Green Line were banned from the European market.While the ministers’ words implied a boycott or a ban of those products, many of which already have consumer labels marking them as produced in settlements, the council’s conclusions did not state that outright.The EU’s Foreign Affairs Council said that “the EU and its member states remain committed to ensure continued, full and effective implementation of existing EU legislation and bilateral arrangements applicable to settlement products.”It added that “the EU closely monitors the situation and its broader implications and remains ready to take further action in order to protect the viability of the two-state solution.”It issued a three-page statement on the Israeli-Palestinian conflict as part of a renewed effort by the EU to be involved in any US-led revival of the peace talks, which have remained frozen since April.After the meeting, the EU’s new foreign policy chief, Federica Mogherini, said that the EU supports the initiative US Secretary of State John Kerry is pushing to relaunch the peace process.As part of that effort, Kerry spoke with PA President Mahmoud Abbas on Sunday evening.The EU was looking at a regional framework that involved the US, EU and UN Security Council, and that would also include Jordan, Egypt and Saudi Arabia, Mogherini said.“We decided that we cannot just wait and see. We are running out of time. There is an element of desperation in the area,” Mogherini told reporters.She said that media reports of pending EU sanctions against Israel were not true.In response to a question by a reporter about possible EU recognition of a Palestinian state, she said that the question was misplaced.“To me, the real point is not so much the recognition of a Palestinian state, but what can we usefully do to have a Palestinian state,” Mogherini said.EU member nations can recognize “Palestine” as a state, but that would not necessarily change anything on the ground, she said.But, “You could have a wave of pressure that could lead to a positive result,” she added.So her focus, she added, was a “road map for political action” that could have a positive impact on achieving a solution that would allow Israel and a Palestinian state to live side by side in peace and security.The Foreign Affairs Council meeting was the first one to be chaired by Mogherini, who entered her post at the beginning of November, replacing Catherine Ashton. She immediately made a two-day trip to Israel and the Palestinian territories, including Gaza.EU states are sharply divided on the topic of unilateral recognition of a Palestinian state, and the EU would need unanimous consensus among its member states to take the step to recognize “Palestine.”Lithuania’s Foreign Minister Linas Linkevicius told reporters that he believed that such recognition should only come after a negotiated agreement for a two-state solution.“We have to chose to avoid any unilateral steps, because the endgame is clear, a two-state solution, with everyone behind it,” he said.The question is how to reach that goal, he said, adding that he believed the only way to do so was through negotiations.The governments of the UK and Germany have the same stand on this issue as Lithuania.German Foreign Minister Frank-Walter Steinmeier explained this position to Palestinian Authority President Mahmoud Abbas when he met with him in Ramallah on Saturday.But in October, Sweden voted to recognize a Palestinian state.Poland and Hungary did so before they became EU member states. France and Denmark have also scheduled nonbinding votes on the issue.Israel has said that such recognition is harmful to the peace process because it doesn’t give the Palestinians any incentive to return to the negotiating table.